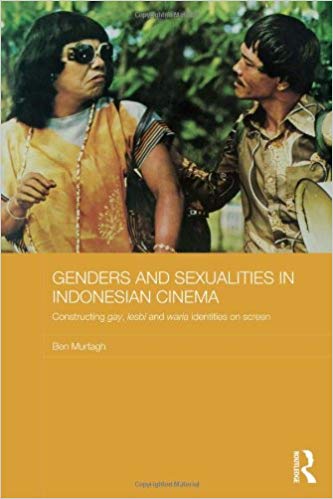 <1> Fluidity of gender construction is often apparent in media and popular culture analysis, and Ben Murtagh’s volume on Indonesian cinema poses the notion against a very interesting backdrop. The volume entitled Gender and Sexualities in Indonesian Cinema: Constructing Gay, Lesbi and Waria Identities on Screen is part of a series “Media, Culture and Social Change in Asia.” In this volume Murtagh offers his analysis of popular films in Indonesia, interesting not just because Indonesia has the largest Muslim population in the world, but also because in 1998 the country and its people were freed from an authoritarian regime who had proliferated order and enforced ideological conformity of developmentalism during its reign (1966-1998). Murtagh’s examination spans the period from the decade of the 1970s into the 2000s, providing powerful yet sympathetic insights into the construction of gender and sexualities against changing social and political backdrops. He focuses on the subject position that is generated by gender construction rather than merely affirming the “positive” or “negative” constructions of non-normative genders and sexualities, even as he argues that following the “negative” construction of female homosexuality the empowerment of lesbian viewers might ensues.

<2> In examining the subject position, Murtagh employs Richard Dyer’s notion of “that’s me factor” as a pivotal point in the viewers’ engagement with the films, suggesting that non-heterosexual individuals’ needs are such that they find information and ideas about non-normative genders and sexualities in the media, rather than within their social circle. In the case of Indonesia, the notion of this mediatized identity formation finds a solid ground, given that the state’s promotion of heteronormative ideology has ostensibly isolated non-heteronormative individuals both from their peers and from each other.

<3> Murtagh begins his exposition of non-heteronormativity in Indonesia with gender transgression, specifically of a man who becomes a woman, waria as he is recognized in the Indonesian colloquial term (chapter 2). Although the wariais positioned as an object of ridicule in many commentators’ explanation about their construction in Indonesian films, Murtagh sees this situation differently. He asserts the importance of viewing waria as a strategy in (re)positioning gender subjectivity. Examining two Indonesian films from the 1980s, Murtagh concludes that some films have, in effect, served to enable many present-day warias (who are mostly come from less-educated and working-class backgrounds) to project themselves into the protagonist subject position. Adopting the idea of “dewigging”-whereby the man-who-becomes-a-women protagonist reveals his/her identity without conforming to the gender binary-as a narrative strategy, warias confront the dominant view of gender rigidly underpinning Indonesian state ideology from 1970s to 1980s. Murtagh’s anaylsis emphasizes the subject position of such empowered gender “in-betweeners” in the construction of waria in Indonesian films of 1970s.

<4> Indonesian gay subjectivity is discussed in chapter 3, where Murtagh provides examples of films that portray homosexuality either as symptomatic of a larger moral decline or as representing the patholigally foreign nature (and origins) of the concept. The films were released in the 1980s, a decade during which the campaign orchestrated by the Indonesian state (both in the dominant narrative and physical oppressions that ensued) reached its zenith as the state required ideological conformity from its citizen. In this context, non-heteronormative sexuality was considered within a social and moral vacuum, requiring that it be condemned. Most filmic portrayals of gay this era underscore that gayness is foreign to Indonesians or that it poses a threat to idealized family structure and to susceptible Indonesian youths. Nevertheless, representations of gay sexuality managed to engage audiences with the marginalized but uplifting gender fluidity inscribing campy portrayals of warias, thereby providing mainstream Indonesians an opportunity to discuss gay identity publically.

<5> In chapter 4, Murtagh examines the presence of female-on-female sexuality in films from the 1990s. He employs the term lesbi (rather than lesbian) to highlight the specific experience in an Indonesian context. Rather than asserting the terms (including the term gay and waria, not coincidentally italicized throughout the book) as a means to exoticize their representation, Murtagh accentuates specific historicity and, in doing so, defamiliarizes the concept, especially were we to have knowledge of Euro-America contexts. It is in this regard that Murtagh’s usage with its acknowledgement of the particular social and political contexts of the historical moment comes closer to the actual Indonesian experience. In observing the lesbi, Murtagh quickly recognizes that many negative portrayals oflesbi sexuality emanate from a central patriarchal position within which men construct the predominate expectations and accepted expression of women’s erotic motivation. In this context, lesbi are the passive consequence arising from an absence of men; policing against lesbi could be justified, vindicated by the prevailing notion that women being dependent on men represented the idealized heteronormative role of women, embraced by the dominant masculine Indonesian state of the 1990s. Homosexuality, and especially lesbi sexuality, therefore, can exist only outside of, beyond the shared national experience of “belonging.” Regardless of construction, however, Murtagh asserts that the negative representations of female homosexuality suggest the presence of such lesbian individuals and serve to empower such female viewers.

<6> The “positive” construction of gay men that becomes apparent in films from the late 1990s and early 2000s is the focus of chapter 5. Here, Murtagh demonstrates the dual nature of homonormativity and gay sexuality within the Indonesian context, emphasizing the degree of exclusion (akin to that seen the representation of warias in the 1980s). It is with such a film as Arisan (The Gathering, 2003), in the hands of award-winning Indonesian director Nia Dinata (b. 1940), Murtagh argues, that a “positive” gay storyline, influenced by Western neoliberal notions of domesticated and depoliticized privacy, comes to the fore. However controversial, just such a construction is necessary step toward a larger acceptance of gays within mainstream society. Put differently, such representations result, relatively speaking, assert a sense of “no contest” towards dominant heteronormative assumptions and institutions. Instead, they uphold and sustain them. Gay constructions in this era are mostly privatized, desexualized and depoliticized, and they are sufficiently anchored in domesticity and consumption. The other side, the “soft” rejection to the effeminate, lower-class and campy waria, keeps them in arm’s-length as it positions them among “unwanted” queers. Comparing the construction of waria subjectivity from the 1970s, Murtagh implies the prevalence of neoliberal lifestyle in any contemporaneous depictions of homonormativity.

<7> In chapter 6, Murtagh returns to his analysis of the lesbi in the new millennium with an observation that the construction of lesbi did not change much in the 2000s. Currently held representations reflected a larger either resulting from weaknesses or presenting as a transitional “phase” for woman before reaching a more decisive sexual orientation conforming to mainstream heteronormative values. Murtagh, however, sees a possibility of a differentlesbi sexuality, one that pose a serious question to older constructions. When analyzing Nia Dinata’s dramatic comedy, Love for Share (Berbagi Suami, 2006), Murtagh recognizes that lesbi sexuality is in this instance constructed as multiple, interrelated narrative challenges to the stereotypical portrayal of female-on-female sexuality. In Murtagh’s view, this expression of sexuality is a much more advanced, certainly far more nuanced representation, ascribing a sense of intimacy independent from social acceptance. By doing so, he reads the emerging subject position defined by intimacy rather than by degree of social acceptance.

<8> In chapter 7, Murtagh offers a resounding conclusion, important on at least two accounts. First, he asserts that the proliferation of non-heteronormative characters and storylines in Indonesian cinema serves to open discussions of non-heteronormative sexuality as recognized sites within which audiences might impose their subjectivity both upon representations and on their diegetic environment. Second, and more important for this reader, Murtagh exposes the importance of a viewing strategy that entertains the possibility of alternative subjectifications based on intimacy and sexual expression in the obvious absence of larger mainstream notion of social conformity. In this sense, this remarkable volume offers rare insights into representations of genders and sexualities constructed within broader Indonesian contexts.