Sound and public space in China: the People’s Park 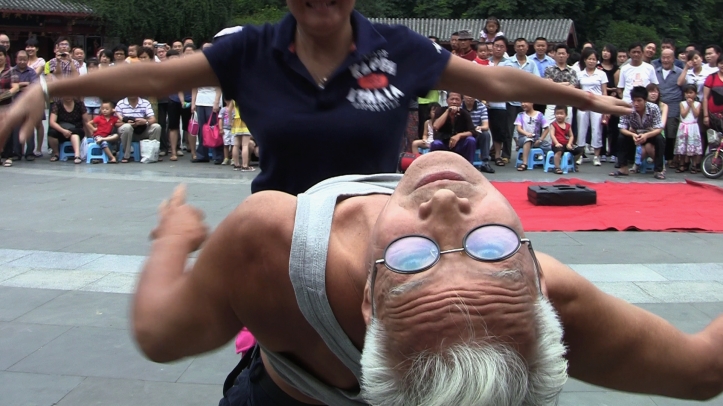 This film consists of one single shot produced by a camera ‘walking’ around a public park in Chengdu, China. For 78 minutes we were brought by the filmmakers, Libbie D. Cohen and J.P Sniadecki, glancing from one crowd to another, who gather in open air doing their activities, mostly dancing, singing karaoke or just strolling the park.

I am interested in discussing this film in two different ways. The first one is a relatively ‘conventional’ way to ‘read’ the film as a ‘text’ that tells a story of post-socialist China. This brings me into an elaboration of ‘crowds of people’ and it’s variations, (i.e. the public) in particular social and political transitions, not merely as a story of a unidirectional evolution of political change but rather to open up a discussion on multiple meanings of congeries of individuals in a certain social and political setting.

The second is to review this documentary as an audio visual work that is not bound to any scopic regime and allows the ‘visuality’ to speak for itself (Haraway, 1991) rather than implying a particular scopic regime as if it is universal in nature. By this way of approaching the visuality, I expect to come into revealing the triptych relations of reality, filmmakers and audience (Nicholls, 2001) that enable me to argue for the role of this particular documentary film (and its technical apparatus, i.e. camera) to mediate the viewers to the reality, rather than immersing them into the narrative.

For me, this latter ‘reading’ would make the narrative and its claim of the factual reproduction of reality – as a documentary film avows – no more interesting than the diegetic environment it produces. This way of commenting to the film potentially opens a possibility of asserting a post-narrative cinema without having to rely on digital manipulation of its diegetic environment and digital characters (as asserted by Cubitt, 2002), but through the awareness of the filmmakers, the film’s subjects and the audience on the presence of camera as implied by the record of the diegetic world. 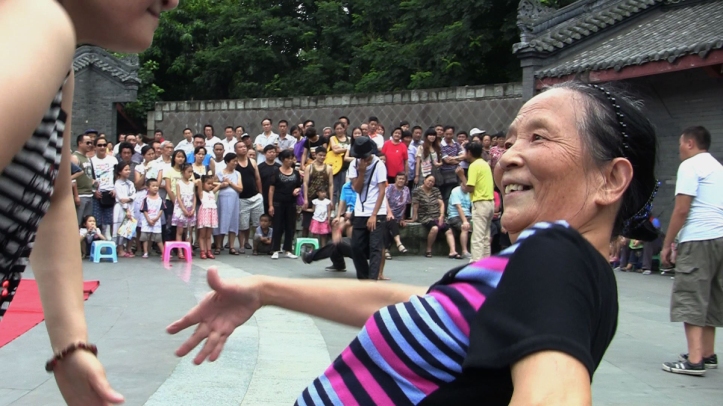 In ‘reading’ the film as ‘text’ and putting it in certain social and political contexts, regardless of the film’s title that mention ‘people’ as being attributed to the park, the crowd in the people’s park is closely related to the ‘public’ in a post-socialist context that closer to its connotation to the ‘common’, related to their activities in sharing resources that are made available by the state. This is a new lexicon that is relatively safe to use in comparison to ideologically-charged terms such as “masses” or “people” for the new political imagination of the congeries of individuals, considering the aptness of the term ‘public’ in the new (or post-socialist, if you like) settings. In this park, individuals gather around their own activities, as mentioned earlier, dancing, singing karaoke and strolling around the park, and the camera glancing at them evading to make any categorization. This is the new public, where the crowd is established without any urge to be categorized in any way.

Compared to activities such as political protests in Tiananmen Square, Beijing or Istiqlal Square, Istanbul or any other protest happened in the main squares of the major cities in the world, what happened in the documentary are relatively apolitical. Judith Butler (2015) calls the earlier type of congeries as ‘assemblies’, in which their very existence might instigate an interrogation to neoliberal structure that caused precarious life to these subjects. These assemblies for Butler are political in nature, posing question to the ethical aspects of cohabitation. Compared to those, no ‘political messages’ critical to the government are brought about in the dancing and singing; neither does political mobilization of the people based on any particular ‘collective spirit’ exist in these congeries as portrayed in this documentary. They crowd gather, or stroll, based on their interest in music, dance or just by being in the park. The ‘people’ in the ‘people’s park’ – that used to be heavily imbued with political mobilization – becomes ‘public’ related to the function of the park as a shared-space that is being commonly used together.

Interestingly however, the space within the film’s diegetic is ‘divided’ along the activities and lines of interests, at least as defined by the auditory element that goes along the inverse square law, in which the space inhabited by particular sub-public is defined by the range reached by the diegetic sound. As the camera moves further away from one crowd, the sound of that crowd becomes weaker, while the sound from the next group becomes stronger as it comes into the frame, implying a movement from one ‘space’ to another, as if there are multiple porous inner-spaces within the diegetic park as a ‘public space’.

Is this film suggesting a naturally depoliticized collective life in a shared-space totally regulated by the laws of acoustics? Is contemporary China a massive depoliticization of collective lives, and its society in the process of making a new political imagination in an urban setting? Those are reasonable conclusions, but a closer examination of space and places will bring us into a question of political struggle in which power relations could be further revealed in discussing the space and place and how they are formed by these power relations. This would be a discussion for another occasion since I am more interested in keeping this piece in a different direction in discussing this film.

The second ‘reading’ is more esoteric, which involves untying the film from the socio-political context, making the narrative less interesting than the diegetic world it produces. The film makers are part of the well-praised Harvard University’s Sensory Ethnography Lab who intend to produce works that are more ‘sensorial’, and relies more on human sensory capacity to reveal whatever content or other “narrative elements” based on the recording of the factual world. I have mentioned the auditory element in making a distinction of the multiple cinematic space within the diegetic. In this light, the soundscape element is not meant to become an accessory that merely supports the narrative, rather it stands to build a cinematic perception of its own (but also always in conjunction with the visual) to create a compression of multiple spaces and time rather than putting the two categories separately in a Cartesian-esque manner.

The visual element in cinema is considered to be synthetic since it consists of three distinct yet sequential cinematic times: the past, the present and the future (Cubitt, 2002) and this has generally been known to run in linear fashion, creating the three-act structures of cinematic events. In this documentary, time progresses (as the cinema reveals its narrative) going along with the spatial movement (as the camera strolls) and these are signified by the changes in the diegetic soundscape – as captured by the microphone (and mixed fabulously by Ernst Karel). The cinematic time overlaps with the cinematic space but with spatial transition kept intact through the transitions in the auditory element. The cinematic event in this documentary is construed through the transition of cinematic space, not solely through actions or whatever is revealed through the cinematic time.

Now I’d like to move into the role of the camera in this film. Surely the camera work is the main technology producing visuality but in this documentary, it is special since it has recorded people that were not prepared to be on camera. They were fully aware that the tool and its operator, a white-American man in the form of Chinese-speaking J.P. Sniadecki, (see his other film, Iron Ministry) is among them. This made these ‘social actors’ looked into the camera, turn their face and gave a reaction. Sometimes people, especially children, waved their hands into the camera, gesturing the existence of the cinematic apparatus. Some others, mostly adult male subjects, assumed flat expressions which could easily be interpreted as uneasiness of being recorded without their prior and proper consent.

To me, this camera work implies two important thing: the tangibility of the recording apparatus and its ‘honesty’ regarding the recording it produces.

Firstly, the camera becomes a tangible technical apparatus of the cinema. Regardless of its invisibility in the diegetic it is tangible through the people’s reactions. This is more than the “breaking of the fourth wall” in a Brechtian manner, but a robust statement on the role of the medium (film and its technical apparatuses) in connecting the triptych in documentary films: subjects, filmmakers and audiences. By putting the camera that way, watching this film becomes a mediated experience rather than being immersed sensationally to the narrative world.

This does not mean that mediated-experience is better than the immersive one, only that it is different. More importantly, this could be a denaturalization of immersive experience in film-watching to provide an important break from a particular format that has been prevailing and regarded to apply to most films and all types of audiences.

Moreover, in a film that claims to be a ‘documentary’ or ‘non-fiction’, this mediated experience is particularly interesting because when a film claims (and is expected by its audience) to represent reality, most of the time, it keeps the camera hidden and hides the filmmaker from its diegetic world, thus asserting the ‘objectivity’ of its narrative.

Of course, the film makers sometimes appear in the diegetic and their recording apparatuses can also be seen, and in those cases, both the film makers and the audience play performative roles where they act out their identity to the audience (Bruzzi, 2012). In examining the never-steady relations of subject, filmmakers and audience in documentary films, the mediated experience that had been brought by People’s Park is interesting in opening up a possibility of seeing a documentary film as a result of interactions between reality-filmmakers-audience, rather than seeing those elements as constantly separated one to another. Departing from this point, People’s Park advocates the mediated experience on the tripartite relations rather than on the narrative (as in Griersonian style of documentaries) or on the performativity of the film maker (as in Michael Moore’s and Nick Broomfield’s works).

Secondly, on the subject of the honesty of the camera. Is the camera always honest? This sentence most often comes as a matter of conviction rather than a question, asserting the immanent objectivity of the cinematic technical apparatus outdoing the film maker’s personal egotistic claim about their personal and subjective importance as an artist. For me, rather, the camera has their own bias and this is inevitable. In the case of People’s Park, I might be oversensitive but I can sense something in Sniadecki’s camera work that shows this bias. For instance, the camera is reluctant to linger its ‘gaze’ toward adult male subjects who stare back at it, but it is more relaxed in recording females and minors. Even at the pedestrian level, camera ‘has chosen’ their preference in treating reality, let alone in ‘big topics’ such as corporate crimes or genocide. Related to film makers’ venture to produce a sensorial underpinning of a cinematic world, recording as an act and as a product becomes an ethical problem at the first place. This is a topic that I would gladly explore in another occasion (I have been thinking to do this extensively on Joshua Oppenheimer’s The Act of Killing and The Look of Silence).

Eventually, documentary, despite its claim of factual truth, cannot escape its nature in showing life as being narrativized. In the case of People’s Park, the narrative is not separated from the medium; instead, it happens within the medium and its technical apparatus. Hence, the experience of watching the film becomes a mediated one rather than an immersive one.

(Thanks to Hatta B. Sasono for editing this essay)